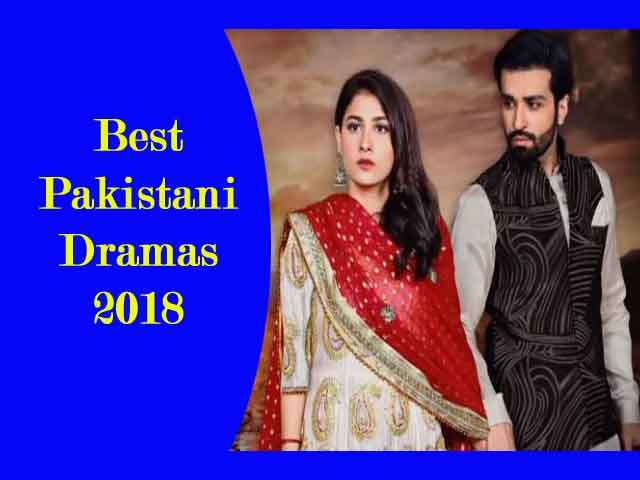 Are you planning on binge-watching entertaining and enjoyable Pakistani dramas? The Pakistani entertainment industry makes some of the best dramas that keep us hooked. Dramas and soap operas being the major part of our lives that gives us a light-hearted moment from time to time. Are you looking for Best Pakistani Dramas 2018?.

Here are some of the Best Pakistani Dramas 2018 list

Iqra Aziz playing Ajiya Nazakat Ali also known as Jiya as a nickname. She is Arsal’s love interest and cousin.

Samina Ahmed playing Mumtaz Begum also known as Bi Jaan. She is the grandmother of Jiya and Arsal.

Nadia Afghan playing Shahana Batool also known as Shanno. She is the mother of Arsal.

Farah Shah playing Naeema. She is the mother of Jiya.

Arsal and Jiya are cousins. They both belong to a big joint family full of quarrels, gossips, love, and joy. Arsal and Jiya are forced into a nikkah despite the two of them hating each other’s guts. Neither of them want to be married to each other and completely disagree with the family’s decision of tying a knot between the two. Now both of them try to come up with different ways and schemes to convince the family in breaking the nikkah and make them hate the other party’s family. During all of this Arsal realizes that he has fallen in love with Jiya despite not liking her at the beginning. He confesses his love to Jiya but Jiya being the stubborn girl she is, refuses to reciprocate that love even though she might be in love with him as well. But in an incident where Arsal gets hurt and Jiya rushes to help him proves that she cares for him and loves him. So, even though they planned to divorce and break the nikkah, in the process of it they fall in love and the nikkah is saved.

Suno Chanda is easily marked in the list of top 10 best Pakistani Dramas as it diverts from the usually very serious auras and genres of mainstream dramas and has a lot of humor in it which keeps the viewer entertained and cheery.

Nadia Khan playing Tabassum. She is the wife of Sajjad.

Omair Ranna playing Sajjad. He is the husband of Tabassum.

Tabassum and Sajjad are a middle-aged married couple. They seem to be struggling in their relationship a bit because Sajjad seems to not care about his family or anything that goes on in the house. He is very self-centered. While Tabassum is the only one who carries all the burden both outside and inside the house. Both of them are working people. But it is especially harder for Tabassum because she carries the burden of the whole house, her husband and she also has two younger siblings that need to be taken care of by her.

This drama opens the viewer’s eyes to how society pressurizes women and even the man who wills to help his wife or any woman. All of us face this problem in our day to day life and we are so oblivious to it that we let it slide. But this drama gives us the perspective which opens our mind to the different struggles that women face in society that most of us chose to ignore.

Sara Khan playing Natasha also known as Tasha for short. She is the daughter of Aziz

Aziz Ahmed moves into a house that he got the custody of after winning a 23 year-long court battle against his stepbrother. But right after moving in, he notices that the house is haunted by supernatural powers and creatures. It is soon discovered that the spirit that lurks in that house and haunts it is the ghost of his stepsister who is here for revenge against some wrongdoing that happened back in the past. She begins terrorizing their house and different aspects of their life by messing with Aziz’s daughter, Natasha Also known as Tasha. Aziz’s granddaughter is also not spared from the terrors of this ghost. They are greatly disturbed.

This drama steers away from the typical genre of romance and drama and topics of marriage and love and focuses more on the genre of horror and mystery which has its thrill. It is easily ranked in the top 10 Pakistani dramas of 2018.

Asma Abbas playing Fehmida. She is the mother of Bhola.

Ammara Butt playing Komal. She is the cousin of Bhola.

Kashif Mehmood playing Nusrat Mian. He is the uncle of Bhola.

Munazza Arif playing Rizwan. She is the aunt of Bhola.

Noori and Bhola are the lead characters of this story. Noori is the daughter of a poor minimum wage man. Bhola is a mentally challenged individual. Noori does not like the lifestyle that she has to live while staying with her parents. She thinks she is not made for the poverty life. So to make a future for herself she goes to the city and works in a factory. In the city, she meets Sahir and starts developing feelings for him. She tells Sahir that she wants to marry him and Sahir brushes it off and agrees. But after a while, Sahir gets arrested for stealing money from the factory and needs money to bail him out. Noori, blinded by her love for him, steals jewelry from Baaji and uses it to bail Sahir out of jail. But she is imprisoned for stealing from Baaji. She also needs bail money but her parents and her are poor and don’t have money. Shokha, an old pervert, offers Noori’s father to marry Noori in return for bailing Noori out of jail. Noori gets herself out of prison and to rid herself of Shokha, she runs to Sahir and asks him to marry her. But Sahir is packing his bags up and planning on running away and he refuses to take Noori with him let alone marry her. Heartbroken, Noori goes to her mentor who tells her that to save herself she should marry Bhola. She does so and then faces the challenges and struggles of being married to a mentally disabled man.

This drama ranks on the top of the best Pakistani dramas.

Khalid Malik playing Rehan. He is the best friend of Kanwal / Fouzia.

Sarmad Khoosat playing Raheem. He is the brother of Kanwal / Fouzia.

Fouzia is a youthful girl living in a village with her parents and siblings and a sister-in-law. She is rebellious and outspoken. She doesn’t agree with the terms off the society and doesn’t conform to the norms of society. One day she is forced to marry Sajid, her sister-in-law’s brother even though she loves Abid. After much struggle and defiance, she manages to marry Abid and soon has a baby boy with him. She reminds Abid about how she wanted to be a model before marrying him but Abid tells her to stay home and take care of their child. Enraged, Fouzia has many fights and arguments with Abid. She gets physically and mentally abused by Abid as well.

In the end, Abid divorces her and kicks her out of his home. He marries a woman called Ruby and Ruby gains custody of Fouzia’s child. Heartbroken, Fouzia decides to move to Karachi and start a career for herself there so that she can support her family and get her son back from Abid. She changes her name to Kanwal Baloch. She faces many challenges in the fast city life and befriends Rehan, a makeup artist. Fouzia gets into the entertainment business and becomes famous on social media platforms.

She meets and falls in love with Shehryar, who proposes to marry her. Kanwal accepts but is scared because she hasn’t told Shehryar about her son or her previous marriage but this soon is exposed by the media who fabricate the story negatively. Though Shehryar is hut but he listens to Fouzia and forgives her. The marriage is still on and both of them are preparing for it but unfortunately, Fouzia’s brother kills her in her sleep because he was ashamed to be her brother. Her parents and Shehryar ae devastated. She is buried and the drama ends with Shehryar bringing red roses to her grave.

This is easily one of the top best Pakistani dramas of 2018. It is based on a true story of Qandeel Baloch and the struggles she went through while putting up a facade in front of society. It shows us how we can’t see what the person is going through and we are very quick to judge.

Azfar Rehman playing Sheheryar. He is the love interest of Asma.

Hina Altaf playing Asma. She is the love interest of Shehryar.

Saba Hameed playing Noureen. She is the mother of Shehryar.

Akeel Abbas playing Saad. He is the brother of Noureen.

Madiha Rizvi playing Nazia. She is the wife of Saad.

Anam Goher playing Sumbul. She is the sister of Nazia.

Sharmeen Ali playing Zara. She is the wife of Sameer.

Asma is an orphan girl who was abandoned by her parents and sold to a family where she is related to harshly. She is treated as a maid but not paid. She does all the chores of the house. But she does not complain as she doesn’t know anything better. She is happy that at least the family is keeping her. Amma Jan comes to Pakistan from America in search of a wife for her oldest son called Salar. Salar’s younger brother, Shehryar falls in love with Asma and secretly marries her. He goes back to America so he can submit forms for Asma and make her a resident in America but he gets into an accident that leaves him badly injured and in a coma. Back in Pakistan, Asma is devastated. She also finds out she is pregnant with Shehryar’s child and is kicked out of the house because of this. She faces many struggles and gives birth to the child. Soon Shehryar finds her and takes her back with himself and lives happily ever after.

This is a typical romance story in which the lovers struggle for their love. I is one of the top 10 best Pakistani dramas 2018.

Ushna Shah playing Nigar she is disabled. She has some problems in her legs because which she limps. She is the cousin of Taimoor and also his wife. She is the niece of Shama.

Bilal Abbas Khan playing Taimoor. He is the husband of Nigar. He is later married to Saba.

Azekah Daniel playing Saba. She is the love interest of Taimoor and later she marries him.

Samina Peerzada playing Shama. She is the mother of Taimoor. She is also the aunt of Nigar and Saba.

Sajid Hassan playing Zafar. He is the father of Nigar and Junaid.

Mehar Bano playing Batool. She is the younger sister of Taimoor’s, and also the wife of Junaid.

Asad Siddiqui playing Junaid. He is the brother of Nigar. Also the husband of Batool.

Mehwish Qureshi playing Saleha. She is the older sister of Taimoor.

Ammara Chaudhary playing Zeba. She is the ex-wife of Junaid.

Nigar is the antagonist of this story and the story also revolves around her. She is very cruel. She has an evil heart. She has her eyes set on Taimoor and has fallen in love with him and wants to marry him. But Taimoor likes Saba. Nigar comes up with different schemes and plans to take Taimoor away from all of his family; Shamma, Saba, Zeba. And have him to herself. She succeeds in doing so and marries Taimoor. Then she tortures Shama relentlessly and makes her suffer a lot. Soon Taimoor catches on to her Antics and Nigar faces the consequences of her evil and disgusting actions.

This drama is very easily included in one of Pakistan’s top 10 best dramas.

Created by: Six Sigma Plus