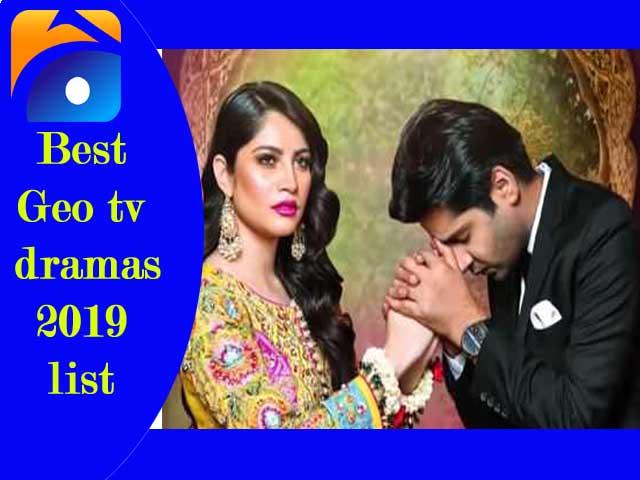 Dramas people are watching throughout the globe, but some dramas got so famous and most rated on social media that no drama serial can even reach that limit. Few geo TV dramas are most-awaited and impressed the audience with the must-watch quality. The credibility that these few dramas got is because of their most twist and turns. The suspensions quality of these geo TV dramas was amazing. This makes the audience enough to involve them in drama story and continuity. The top-rated geo tv dramas 2019 topped the chart of excellence and most viewers which made the actors surprised by knowing the fact.

The thing which is so interesting in geo TV dramas of 2019 is their storyline. The story writers made their full effort to make this drama storyline so interesting with full zeal and zest. The top-rated geo tv dramas 2019 story are reflecting the youth and modern societies which make the viewer’s astonishing by watching the true image of their life in these geo TV dramas. Due to such qualities, that’s why, these dramas got the label,’ BEST GEO TV DRAMAS 2019’.

Alif Drama was released on 5th October 2019. It was officially broadcasted on geo TV. It is a Pakistani spiritual/ romanctic drama TV series created by Sana Shahnawaz and Samina Humayun Saeed under their newly formed production epic entertainment. This drama based on Umera Ahmed’s novel. The story of this drama is amazing which revolves around the struggling actress and rebellious film-maker, both have their disturbing past. It showed how both came across the same path and understands the terminology of the alphabet Alif illustrating the bond of an individual with his God. This was one of the most awaited and liked geo tv dramas 2019.

Moreover, there were many reasons why people taking a huge interest in watching this drama, but one main reason was the comeback of Hamza Ali Abbassiafter a long break. The storyline makes this drama amazing and watchable. Alif drama wired after few weeks and topped the chart of most viewers and wins the hearts of the people within days. Unlike other dramas written by Umera Ahmad, this drama also showed the spiritual picture and religious element which resonate with the people doing well. Alf’s characters hard work and their dialogues won the hearts of everyone. Throughout the globe, people watching it with their families and friends due to their brilliance work done by all the aspirants evolved in creating this drama.

One of the best geo TV dramas,” Ab Dekh Khuda Kya Karta Hai ” was released on 7th August, 2018. The drama stars DanishTamor, Yashma Gilland Hamyun Saeed as the main leads. Its airs every Tuesday at 8:00 pm. Danish Taimoor played an anti-hero role in this drama serial. This is also the top-rated drama of geo TV in 2019, due to its entertaining and suspension quality. Its story is so interesting that people even in their busy life routine, still give time to watch its worth watching story. Ab dekh khuda kia kara hai hey, the story revolves around the life of businessman Jan-e-Alam who manipulates young innocent girls who chronically jobless. Many women, who working under Jan-e-Alam are constantly harassed and slandered when they refused the advice of their boss.

Interestingly, the story reflected the real picture of today rich people who are constantly exploited the poor people on different job markets and labor markets. Ab dek khuda kia karta hai, by its name one can easily guess that what could happen if someone does bad things in the society. This top-rated geo TV drama got maximum people’s favored vote for one of the best geo tv dramas 2019. This drama story is relatively new and it is an emotion that makes people cry after watching it. Sanamchudhary was already a favorite actress of the viewers and with this drama, he got even more popular around the globe. Danish Taimoor also played a morally good role of a businessman who gave even more colors to this top-rated geo tv dramas 2019.

Yaariyan was released on 19th April 2019 on the geo TV channel. This is a Pakistani drama serial in which one interesting thing is that this drama also aired on Indian channel Zindagi TV. Its story revolves around the three friends Babar, Shah Jahan and Ridaplayed by Faisal Qureshi, Aijaz Aslam, and Samiyamamtaz respectively. Yaariyan was a blockbuster geo TV drama which broke all records of ratings. Yaariyan drama loved by many viewers by its entertaining value. It is a top-rated geo tv drama 2019 that made an everlasting effect on its viewers due to its hardworking characters, workers and story writers. This makes this drama one of the best geo TV dramas of 2019.

The Geo TV drama was released in Octobar3, 2019. This is a Pakistani television series. It features Naleem Muneer and Munir Ashraf. It airs every Thursday night on geo entertainment. This is the story of a beautiful girl named Roda, who is the beloved sister of her three brothers and blue-eyed child of her mother. However, her innocence and good fortune make her target of her sister-in-law’s hatred, resentment, and jealousy, resulting in terrible adversity and misery for Rida. To make matter worse, her husband: who is an extremely insecure person; mistreat her instead of supporting her. This is an incredible story that every person throughout the globe taking a huge interest in.

Surprisingly, it is the latest geo tv drama, but still, it becomes a massive hit. This top-rated geo TV drama getting positive reviews and records ratings from the viewers. Kahin deep jaley’s story is somewhat typical but the relationships between different characters have been shown in such an emotional and realistic way that the viewers are deeply engrossed in the drama. The relationship between the siblings is loved by everyone. Interestingly, the stars name like Imran Ashraf, NeelamMunir, Saba Hameed, Saba Faisal and Ali Abbas playing the leading role in the drama, that’s why this drama become the best geo tv dramas 2019. Kahin deep jaley also most watched geo drama. It may likely overturn the record of most watched and liked on all social media networks.

This is a Pakistani geo TV serial broadcasted on geo TV on every Friday Merarabwaris drama was released on March 7, 2019. It is changed between airing weekly and then two episodes biweekly on geo entertainment every Wednesday and Thursday, replacing baba Jani and Qaid. This top-rated geo TV drama’s characters Danish Taimoor and Madiha Imam played an outstanding role to make this drama watchable.

Mera Rab Waris has been air for more than 20 weeks although it isn’t picture-perfect, it breaks quite a few stereotypes and has a female protagonist who is different as well as likable. The first few episodes of Mera Rab Waris showed the clarity with which the writer focused on different pressure and criticism girl’s face when they decided to follow the path which is unlike others. After that, the story slows down a bit. The most interesting aspect of this Mera Rab Waris was when the girls got married in a modern family, and she faces a lot of problems there. They got different relationships there that family which makes this drama exceptional over other dramas.

Mera Rab Waris amazing story is very different from other drama’s stories. This drama also had an engaging love triangle which was unlike any other. The different storyline and their hardworking characters make this drama one of the best geo TV dramas 2019. The role of Madiha Imam, MirzaZainBaig and Danish Taimoor was liked by the viewers. Moreover, Mera Rab Waris also directed brilliantly.

Being living in a diverse society we still lag in knowing the facts and dynamics of different societies. The era of globalization, the era of diversity, the era of confusion, the era of competition and the era of complexities, one can easily imagine that, what has to be done and what not to be? Why we are facing such unknown social contagiousness? How to handle It.? That’s all, to cope with the above questions: what, why, and how and knowing the after all facts of diverse societies. If someone wants to know the depth of the roots of different societies and social diseases, it is highly recommended for those aspirants who start from zero. And for those as well who know something about such black spots of the societies and different people, but still they need to gain and enhance more knowledge.

Nevertheless, The top-rated geo tv dramas 2019 draws all the cultural, social, religious, different people habits, and gender inequality pictures. They also spot the common issues and its solutions in these best geo tv dramas 2019. People can easily be attracted by their storylines and character’s role which reflects the facts based picture of the modern world.

Summary
Article Name
Geo tv dramas 2019 list
Description
Geo tv dramas 2019 has few dramas got viral because of their most twist and turns. The suspensions quality of these best geo TV dramas was amazing. This makes the audience enough to involve them in drama story and continuity. The top-rated geo dramas 2019 are
Author
Saqib Ahmad
Publisher Name
onlypakistann