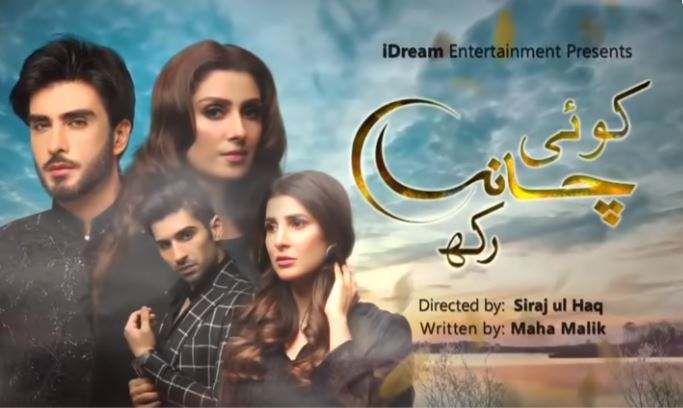 Koi Chand Rakh wad a Pakistani Drama launched on 19 July 2018  on ARY Digital. Koi Chand Rakh was directed by Siraj-Ul-Haque and written by Maha Malik. The Drama met with mixed to negative responses throughout its run, being panned for its old plot and poor characterization, but was a rating victory nonetheless.

Dr. Rabail is a caring young doctor whose parents died in her childhood when she was five. Dr. Rabail was raised by Asad Niazi her maternal uncle and his wife Nafeesa. They have their own son Umair (Muneeb Butt) and a daughter Nishaal (Areeba Habib). Rabail always took care of Umair as an elder sister, but she was unaware that Umair love her. When Umair expressed her feelings to Rabail. She was horrified with this as she took him as brother. Nafeesa overhears all the conversation and decided to get Rabail married as soon as possible.

best pakistani Drama that you should watch

On the other side Zain (Imran Abbas), who belongs to a wealthy family. Zain falls madly in love with Nishaal and tries to approach her. A misinterpretation leads him to believe that her name is Rabail.  After some occasional meetups, they started liking each other. After some time, Zain came to know that the girl he loves is the daughter of Asad Niazi his father’s friend and soon he sends a proposal for Rabail. Nishaal pressurizes Rabail to tricks Umair by sending him to college with the promise that Rabail will wait for him. Umair went to collage happily but the plan was to get Rabail married.

Zain and Nishaal finds out the miss understanding about the proposal that Zain brought for Rabail, that was for Nishaal. Nishaal expressed her feeling to Zain, but he refuses because he had made his father proud and happy with this marriage and he doesn’t want to spoil his sweet relationship with father. hence Zain gets married to Rabail and sacrifice his love.

Zain and Nishaal started making each other jealous. Zain started getting close to Rabail while Nishaal started seducing with Zia, Zain’s best friend. On the wedding night, Zain and Nishaal leave egos and revive their affiliation. Zain’s father discovers the relation and got a heart attack and dies after making Zain promise that he would keep relation with Rabail. Nishal was unable to tolerate seeing them together. Thus, she told Zan that Umair’s feelings for Rabail and make her responsible for Umair’s feeling. Rabal becomes a culprit in Zain’s mind.

Zia uses Zain’s sister as she was having a crush on him, trying to ger revenge from zain and disappear on the wedding day. While zain and Nishaal get court marriage and live in a separate house with Nishaal. After a year Rabail gives birth to a baby boy while Nishaal was asking Zain to divorce Rabail, but Zain eventually came to know that he doesn’t love Nishaal. He was just attracted by her beauty which is not everything for life. He apologizes to Rabail, but she was deeply wounded at the end Rabail accepts Umair and Zain regretting with no one to love him.