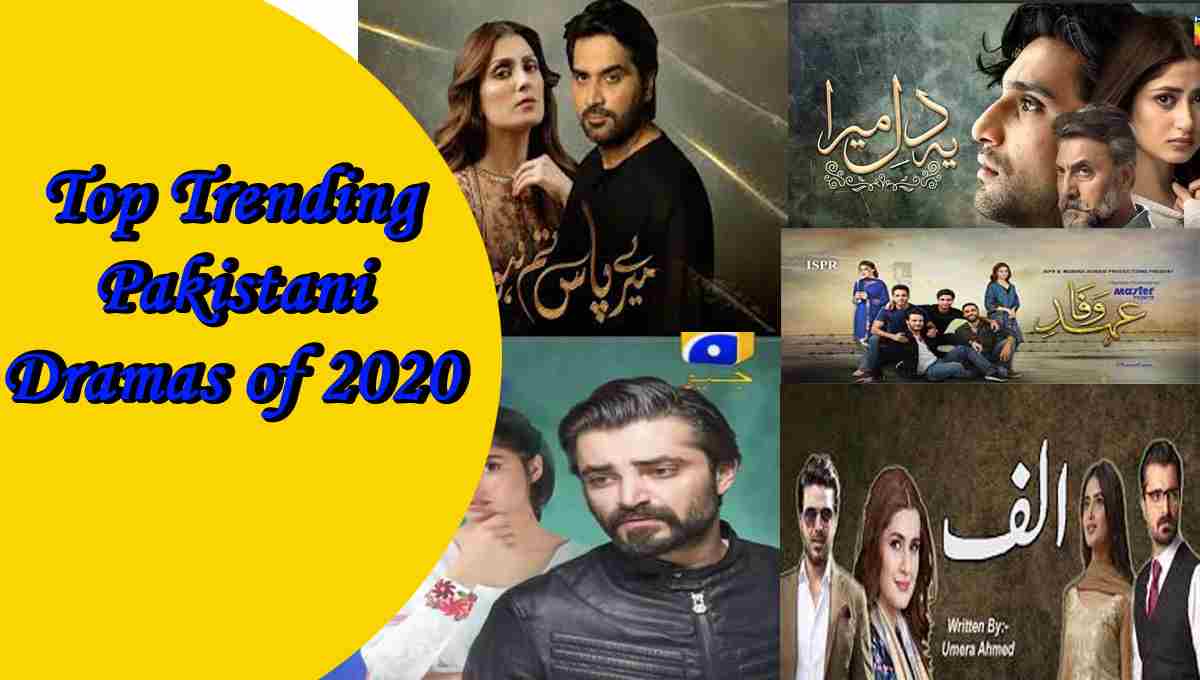 Pakistani Dramas of 2020: The drama production of Pakistan on its bloom and creating quality content for the viewers not only to entertain but also to highlight some critical social problems. Additionally, the mixture of skilled actors and the new talent is simply working as a foundation to brighten the acting skills, the production, story, and everything obligatory to make a happening drama serial.

The interesting screens illuminating the superior time with a highly charming episode of drama for the spectators is not less than the therapy in relaxation. Besides this, there is still a lot to work on to enhance the content quality as well as the subject addressed in these serials.
Numerous amazing dramas are being broadcasted on various channels these days. While some of them are among the top trending Pakistani dramas of 2020 that you must watch.
Here are Top 10 trending Pakistani dramas of 2020, to be added to your new watch list:

The list of Pakistani Dramas of 2020 starts with Alif. An astonishing drama television series designed by Sana Shahnawaz and Samina Humayun Saeed. Above all Written by Umera Ahmad based on her story of the same name and directed by Haseeb Hassan. It stars Hamza Ali Abbasi, Kubra Khan, Sajal Ali and Ahsan Khan in leading roles.

The story of Alif revolves around the adventure of a stubborn filmmaker and a struggling actress, both having disordered pasts. For instance the alphabet Alif representing the bond of a person with his God. Thus the drama serial premiered on 5 October 2019 in Pakistan, with the prime slot of 8:00 pm Saturdays on Geo TV. All of the episodes of serial till now received positive evaluations.

Serial Thora Sa Haq is a Pakistani romantic drama series that started broadcasting on ARY Digital from 23 October 2019. Produced by Abdullah Seja. Imran Abbas and Ayeza Khan are executing the leading characters in their fourth on-screen front after Tum Kon Piya (2016), MohabbatTumseNafrat Hai (2017) and Koi Chand Rakh (2018). Twists and shifts are parts of the drama.

The drama is being on-air in the prime-time slot at 08:00 pm on Wednesday.

Yeh DilMera highlights Adnan Siddiqui, Sajal Ali and Ahad Raza’s essential roles. Written by Farhat Ishtiaq and directed by AehsunTalish. The story investigates the indisputable chemistry and fascinating affinity between opposites.
Ahad plays Amaan, a young knowledgeable man who runs his own prosperous business. Sajal plays Noor ul Ain, a girl who has struggled sleeping due to some past wounds. Which are yet undiscovered whereas Adnan Siddiqui is performing as Mir Farooq aka. Similarly Agha Jaan who is Sajal’s overprotective dad who seems to be a very insecure man with a dark story of his own. Furthermore the drama is being on-air in a prime time slot at 08;00 pm on HUM TV every Wednesday.

In the list of Pakistani Dramas of 2020 Ehd-e-Wafa presents complete family enjoyment, unlike other dramas, this one does not deal with marital problems, It deals with the journey of four friends who came from totally different environments.

Each track gives something new and fresh Some of the performance is astonishing. Zara Noor Abbas, Ahmed Ali, Ahad Raza Mir, and Wahaj Ali’s superb play-acting enjoyed by many. Saife Hasan’s skillful direction gives this drama a must-watch. Unlike other productions directed by ISPR, this one does not concentrate only on the lives of the army persons which is another extraordinary change Ehd-e-Wafa airs on HUM TV and PTV HOME. Directed by SAife Hassan and written by Mustafa Afridi.

The viewer admired the Drama Mera Pass Tum Ho. Since it got on the air and crushed all the records of earlier best Pakistani dramas. Directed by Nadeem Baig and written by Khalil-ur-Rehman Qamar. The story is about a beautiful couple, Danish and Mehwish. Whose love marriage ends when Mehwish chooses a rich man Shehwar over her partner. AS a result, Danish was deeply depressed by this and leaves his job, sells his father’s house. Thus Invested all his money in Stock exchange things turn more reliable and he becomes rich.

Now his son, Rumi, trying to make his father marry his teacher Hania. While, on the other hand, Mehwish gets betrayed by Shehwar and now she wants Danish to Forgive her and start a new life together again. but in the end, Danish die because of a heart attack during his meeting with Mehwish.

The story of Khaas revolves around the beautiful actress Saba Faraz. An ambitious and confident girl and Ammar Saud a businessman with a charming personality. When Ammar’s family sends a marriage proposal for Saba. Despite she rejected the proposal as she wanted to focus on her career. Meanwhile, Ammar succeeds in getting approval from her to get married. After their marriage Ammar starts revealing his true face by disrespecting her and insulting her and the end when she gets a job in his office, Ammar gets jealous of her career.

The story of Yaariyan revolves around two sisters who are totally different from one another. Sadia is respectful and in nikah with Ahmemr but their rukhsati does not happen, while Zubi is selfish and has an affair with Umar. because of some misconceptions, Sadia gets married to Umar by force but they don’t live as husband and wife.

The drama serial Ruswai has hooked a good amount of spectators. Since the time it is being showcased. The story revolves around the painful yet serious sexual abuse problem and particularly the stereotypical manner of the society towards the victim. Sana Javaid is performing the preeminent role and Mikaal Zulfiqar is playing as her spouse who is also extremely possessive about the society’s attitude and approach towards the victim who is no one other than his wife in the drama. Moreover, the twist has been added in the story with the old belief of “Watta Satta” marriage. ARY Digital broadcasted the drama every Tuesday at 08:00 Pm.

From the list of Pakistani dramas of 2020 Ishq Zah-e-Naseeb is a Pakistani mystery drama television series co-produced by Mommal Shunaid and Momina Duraid. For instance, HUM TV broadcasted the drama from 21 June 2019. The drama series concentrates on Dissociative character disease, characterized by Zahid Ahmed along with Sami Khan and Sonya Hussain in the preeminent role. whereas Zarnish Khan and Jinaan Hussain in pivot roles. it also has Yumna Zaidi and Azekah Daniel in an extensive cameo appearance.

Which one of these dramas serials have you watched? Which best Pakistani drama of 2019 is your preference? Share your views in the comment section.