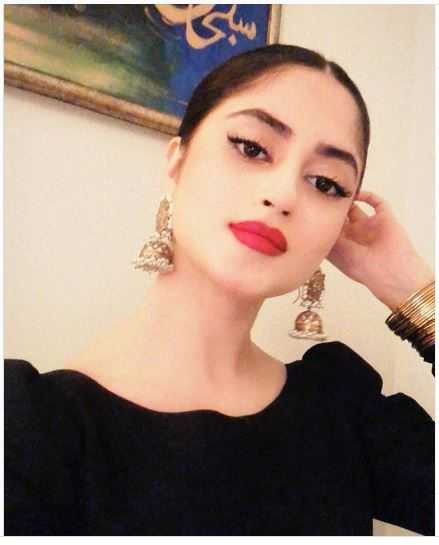 Sajal Ali is a Pakistani actress born on 17 January 1994, Lahore, Punjab Pakistan. Undoubtedly she is between very few heroines who became popular for playing a variety of roles in a range of serials from contemporary social to romantic dramas. Sajal Ali is presently the most demanding actress of Pakistan’s television Industry. Furthermore, she started her career from Naddaniyaan a comedy-drama broadcasted on Geo TV in 2009. Indeed she earned admiration for her breakout performance in the family drama Mehmoodabad Ki Malkain in 2011.

She was born on January 17, 1994, in Lahore and has spent much of her early childhood there. Then they shifted to Karachi when her parents got separated. In addition to this, she has done her intermediate from Karachi. In addition to this, she has a sister Saboor Ali a famous actress and a brother. The young and beautiful actress believes in being confident and brave as most of the time when her mother shared a phrase with her “Loh kya Kahengai?” but she always replies confidently “Logon Ki Parwa Hai Humein?’. In her early life, she wanted to become a businesswoman but eventually, destiny led her to her acting career. Lastly, this beautiful actress is in a relationship with actor Feroze Khan and she has never hidden this fact from her fans.

She has two siblings, a brother and a sister Saboor Ali, who is also a famous actress.

she is not married yet, but she is in a relationship with famous actor Feroze Khan and there are rumors that they are getting married soon.

She has her official Facebook account especially to interact with fans and upload her stunning pictures and videos.

She played the role of Maira khan in film Zindagi Kitni Haseen Hay in 2016 and Arya in Mom in 2017.

The following are the list of Sajal Ali dramas

She is acknowledged as one of the youngest and best actresses of Pakistan showbiz industry without a doubt.

In the telefilm behadd (2013) she earned significant praise for depicting an agitated child indeed.

She unwittingly becomes part of the television industry as she wanted to continue with her studies but then auditions of a drama “mehmoodabad ki Malkayan” and she got finalized and got into showbiz.

This beautiful young actress has gained fame in very less time because of their beautiful cute looks and her acting style that made people fall in love with her performance. in addition to this, you can add your favorite actress/actor name in the comment section.

Best Pakistani dramas in 2019 that you should watch