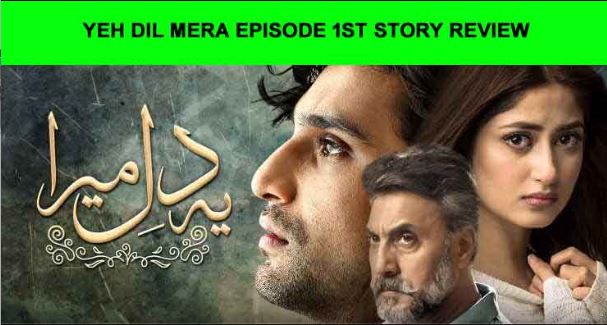 So…Here, The Hum TV is going to present another romantic, emotional and trilled series “ Ye Dil Mera “on your television screens 30th of October. Farhat Ishtiyaq writes this thrilling and unique story with the most delicate couple Aman (Ahad Raza Mir) and (Noor ul Ain) Sajal Ali. The story is about love (Aashiqui) with the worst memories and revenge. Both the characters have different personalities but share the same bond with the mysterious chemistry and passion.

If we talk about the other daunting or bizarre characters of the serial, so Mir Farukh Zaman (Adnan Siddiqi) is one of the most outstanding personalities of the industry jerk in our mind, playing a role of a pampering father with the chronic image. His new look describes many shades of his character. Let’s Review the 1st episode of the drama.

The 1st episode is an introductory part. As we conclude that it’s a thrilling and mysterious story so in the very beginning we saw a woman with a little girl want to escape somewhere at midnight. Instantly she hears a shooting sound which is the indication of something happening unusually with the inky and frightening image.

The classic character Aman (Ahad Raza Mir) portraying an image of a businessman who did very hard work to establish himself in Pakistan. His role seems quite exciting and calm but with a lot of clash inside in his mind.

Mir Farukh (Adnan Siddiqui) is also a tremendous character of this drama playing the role of a wealthy businessman. He has only one close relationship in his life that is his darling daughter Noor Ul Ain (Sajal Ali). They live in a very luxurious house with a lot of servants. She is studying chemical engineering and a very much intelligent girl. Mir Farukh is playing two roles in this serial as a caring father a right image and also a negative image for the other characters.

Ghouri is a character who gather this two businessman in under one roof. He is also a businessman and mutual friend of Mir Farukh and Aman. He invites them to the marriage ceremony of his son where Noor Ul Ain and Aman met the very first time. Aman draws her sketch and reveals that scar which she hides with the makeup. There must be a connection between Aman and Noor ul Ain on the dark side of their past. Noor ul Ain is curious about Aman because he already knows her name and now that mark which she always covered. This is a sign that she doesn’t know him at all.

Noor Ul Ain is an innocent character of that drama and also seems like she is suffering from some mental disturbance. She mostly feels scared off at midnight. She feels like someone is chasing her, but she didn’t tell his father about that because his father is very much conscious about her and sometimes she became frustrated because of his too much caring and pampering nature. Once she told Mir Farukh (father) about a guy studying in her university offered her for a coffee, and he beat him poorly because of his possessiveness about his daughter.

In another scene, Nool ul Ain was sneezing. So her father insults every single servant of the house. He doesn’t have a soft corner for any other human except his daughter.

At the end of the episode, the two main leads Aman and Noor ul Ain meet in the university. Aman gives her a detail introduction that he is a settled businessman in England and in Pakistan.

Hence the 1st episode seems quite mysterious and tragic. All the characters are amazingly playing their roles which makes the story more thrilling. Hence, the spectators are more curious about watching the next episode. Aman is an intelligent, hardworking and dangerous guy. While on the other hand, Noor ul Ain is entirely innocent and sensitive character. Mir Farukh is playing two different characters. A positive attitude for his daughters like a pampering father and a negative character for human beings in the drama.

Here we have two mysteries from this episode which push us to watch the next episode of YE Dil Mera.

What is the connection between Aman, Noor ul Ain, and Mir Farukh?